dont smile at me Chronology

"Bellyache" (stylized as "bellyache") is a song by Billie Eilish featured on her debut EP, dont smile at me. The song was released on February 24th, 2017 through Darkroom and Interscope Records as her third digital single. On May 9th, 2017, the "Bellyache Marian Hill Remix/Audio" was uploaded onto Billie's official YouTube channel.

In an interview with Eve Barlow of Noisey, Billie said:

"It's obviously fictional. When me and my brother are writing we find it fun to put yourself into character or become someone else, to write about something we've never done before. 'Bellyache' is about the concept of guilt, when you do things in the moment because you feel so strongly about them. In the end you're left with the decision you made. That line—'I thought that I'd feel better, but now I gotta bellyache'—is about how you kinda know that you're the worst but you don't care. It's about a psychopath who regrets being a psychopath but doesn't really care."

In another interview with BBC UK, Billie said:

"I wasn't like, "Let's write a song about killing someone!". We were sitting in my garage rehearsing for a show with my brother's friends. Finneas started riffing on the guitar, and one of them started playing on the piano, and I sang the first line - "Sitting all alone, with a mouthful of gum in the driveway".

Then my brother sang, "My friends aren't far, in the back of the car" and I was like "Lay their bodies," like I had killed them. And he just said, "Woah, that's so cool!".

It just grew from there. He came into my room a couple of days later and he was like, 'dude, I wrote the chorus for this'. And he sang it all, and the last line was, "And now I got a bellyache" and I was like, "That is genius"."

It's such a childish line. No grown up says, "I have a bellyache, I gotta go". But it's kind of part of the song, because it's about someone whose really young and knows they're a psychopath. They're like, "Maybe I shouldn't steal this money and kill these people... but I'm going to anyway".

During an interview with Billboard, Billie also stated:

Mike Wass of Idolator called it a "sinister synth-anthem that positively seethes fury and frustration". Billboard's Jason Lipshutz said "she wrapped the macabre lyrics around a delectable pre-chorus hook and a steady acoustic pattern that eventually gives way to a sizzling drum machine. She knows that a song like 'Bellyache' is going to get her more sideways glances than Top 40 airplay, and that's fine with her." Estelle Tang of Elle labeled it a "banger about bad decisions". Pigeons and Planes's Jacob Moore stated that the song "shows off an intriguing edge, which is in large part due to the fact that this is a song about murder".

The music video, directed by Miles and AJ, was released on March 22, 2017. Sydney Gore of Nylon described the music video: "Her latest Miles and AJ-directed visual for 'Bellyache' shows her stranded in the middle of a deserted highway. At first, the scene seems innocent as Eilish drags a little red wagon containing what appears to be some personal belongings. Shortly after, we find out that she's loaded with garbage bags full of cash. When the chorus hits, we feel compelled to dance along with her in the majestic mountain tops and almost forget that there's something fishy going on. It's almost like we're experiencing hallucinations as we watch her bust out some sick choreography down the road which leads to the great unknown. We won't spoil the ending for you, but it's got a major plot twist that we did not see coming at all. So what does it all mean? Clearly, Eilish is not one to be underestimated."

Idolator's Mike Wass claimed "she looks suitably pissed off, but there's dark humor at play here in the juxtaposition of bright colors and pitch-black emotions. I particularly like the little dance break." Jacob Moore of Pigeons and Planes said that the video is "bright, mischievous, and captivating." 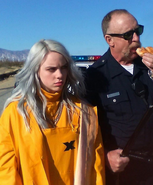 Despite not charting on the Billboard US Hot 100, the song peaked at #3 on the US Hot 100 Bubbling Under chart, which serves as an extention of the Hot 100. It also peaked at #11 on the magazine's US Alternative Digital Song Sales.

Retrieved from "https://billieeilish.fandom.com/wiki/Bellyache?oldid=13945"
Community content is available under CC-BY-SA unless otherwise noted.