Billie Eilish Wiki
Register
Don't have an account?
Sign In
Advertisement
in: EPs, Billie Eilish, Don't smile at me, 2017

don't smile at me

don't smile at me
Extended play by Billie Eilish

"don't smile at me" is the debut extended play by Billie Eilish, released on August 11th, 2017. It has eight tracks in total, six of them being singles.

The EP was re-released on December 22nd, 2017 to include the song "&burn" as the 9th track. The re-released version has nine songs, seven of them being singles.

A Japanese deluxe version of the EP was released on December 12th, 2018. It includes the songs "lovely" and "bitches broken hearts" as well as three previously released remixes of the songs on the main tracklisting.

Upon its release, the EP failed to chart on the Billboard 200 chart, until it debuted at #185 almost two months after its official release, starting to slowly climb up the top 100, then the top 40, until it reached its current peak of #14 over a year after its release. Because of this, the EP is considered a sleeper hit in the USA. It also peaked at #1 on the Billboard US Top Alternative Albums and reached the top 10 at 14 official album charts worldwide. 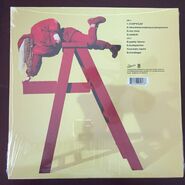 the back of the standard vinyl

Billie Eilish - dont smile at me