View source
watch 01:36
We're Getting Mutants in the MCU - The Loop
Do you like this video?
Play Sound

He and Billie are known to be very close.

Finneas was born on July 30th, 1997 to Maggie Baird, an actress, and Patrick O'Connell, an actor. He was raised in Los Angeles and was homeschooled by his parents. He first began writing and producing songs with Logic Pro at the age of 12.[1]

Finneas played Alistair in the Fox TV series Glee and stars as Shane in the award winning independent feature Life Inside Out. He is also known for his portrayal of the character Spencer (Twilight) in Columbia Pictures' Bad Teacher. He also has a recurring role on ABC's Modern Family and appears in the premiere episode of Aquarius.

Finneas was the lead singer of the band ''The Slightlys" until 2016 when they split up. He now works with his younger sister, Billie. He also has his own solo music.

In December 2019, he was nominated for five different GRAMMYs. He ended up winning all five.

Finneas is currently dating YouTuber Claudia Sulewski, who he has released a single entitled Claudia about. in 2019. In March of 2020 he and Claudia started their own podcast entitled We Bought A House. 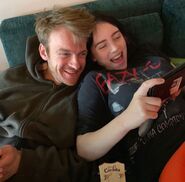