http://www.khalidofficial.com/
Khalid Donnel Robinson (born February 11, 1998), known mononymously as Khalid, is an American singer. He collaborated with Billie Eilish on the single, lovely. He has been a friend of Billie's since 2016.[1]

Khalid was born on February 11, 1998, in Fort Stewart, Georgia. He spent his childhood in various locations including Fort Campbell in Kentucky, Fort Drum in Watertown, New York, and six years in Heidelberg, Germany because of his mother Linda Wolfe's career in the military. Wolfe worked as a supply technician for over 10 years and eventually earned an opportunity to sing in the US Army Band. His mother sacrificed opportunities to pursue her own artistic dreams in order to raise him. In high school he studied singing and musical theater. During his senior year of high school, the family moved to El Paso, Texas.

Khalid began writing and creating music in high school; he posted his early works to SoundCloud. In July 2016, he reached number 2 on the Billboard Twitter Emerging Artists chart. His single "Location" began charting, while Khalid was featured in many publications, including Billboard, Yahoo, Buzzfeed, and Rolling Stone. With production from Syk Sense, Tunji Ige, and Smash David, "Location" finished the year 2016 at No. 20 on the Billboard's Mainstream R&B/Hip-Hop Airplay chart and reached the Top 10 on the BillboardHot R&B Songs chart on January 21, 2017. The music video for "Location" premiered on The Fader's website.

In January 2016, Alina Baraz's single "Electric", featuring Khalid, was released. His collaboration with Brasstracks, called "Whirlwind," was part of the Yours Truly & AdidasOriginals Songs from Scratch series, and received over 700,000 SoundCloud plays. Khalid contributed uncredited vocals to Kendrick Lamar's song The Heart Part 4, released on March 24, 2017. On April 28, 2017, Logic released the single "1-800-273-8255", which featured Khalid and Alessia Cara; the single peaked at number three on the Billboard Hot 100, making it Khalid's highest charting single.

Khalid sold out every venue on his 21-city January–February 2017 "Location Tour", including the 1,500-capacity Tricky Falls in El Paso. Following the completion of the tour, his debut studio album American Teen was released on March 3, 2017. The album received critical acclaim and Grammy Award nominations for Best Urban Contemporary Albumand Best R&B Song (for "Location"), at the 2018 ceremony. On October 24, 2017, the album was certified platinum by the Recording Industry Association of America (RIAA) for selling over 1,000,000 in combined pure sales and album-equivalent units.

In 2017, Khalid won a VMA Award for Best New Artist. Khalid made his television debut performing "Location" on The Tonight Show Starring Jimmy Fallon March 15, 2017, backed by The Roots. His song "Angels" was featured on the ABC drama series Grey's Anatomy in the episode entitled "Don't Stop Me Now", which aired April 27, 2017. Khalid recorded a song with Normani of Fifth Harmony titled "Love Lies" for the soundtrack of Love, Simon, released on February 14, 2018.

In 2018, Khalid's song "The Ways" with rapper Swae Lee was featured in the Marvel film Black Panther. As of February 23, 2018, the song peaked at number 63 on the Billboard Hot 100. On April 19, 2018, he was featured on the song lovely by Billie Eilish. This song is the first single from Billie's debut album, as well as a song on the soundtrack of 13 Reasons Why season 2. 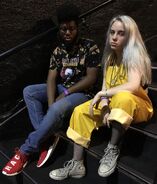 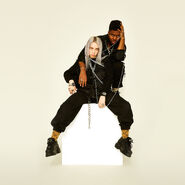 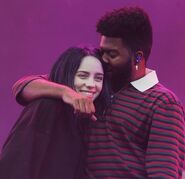 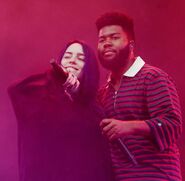 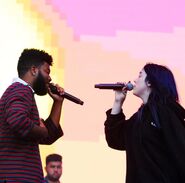 Add a photo to this gallery

Retrieved from "https://billieeilish.fandom.com/wiki/Khalid?oldid=13137"
Community content is available under CC-BY-SA unless otherwise noted.