Patrick Mead O'Connell (born July 7, 1957) is an American actor. He is the husband of Maggie Baird and father of Billie Eilish and Finneas O'Connell.

Patrick is best known for his roles in works such as The West Wing, Iron Man, and Baskets. He acted in Life Inside Out alongside his wife and son. He also voiced the role of Claus Hugo Strandberg in the video game Hitman.

In 2020 he started and starred a radio show with Billie titled Me & Dad. 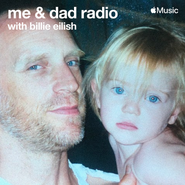 the cover for the radio show
Add a photo to this gallery
Retrieved from "https://billieeilish.fandom.com/wiki/Patrick_O%27Connell?oldid=13314"
Community content is available under CC-BY-SA unless otherwise noted.