When We All Fall Asleep, World Tour

Where Do We Go? World Tour
The When We All Fall Asleep, World Tour is the fourth headlining tour by Billie Eilish spannign from April 13th 2019 - November 17th, 2019.

On February 4th, 2019, Billie announced the tour on her Instagram, revealing the North American dates, while concerts in other parts of the world were blurred. The Australian dates were announced on February 6th, and more dates were added the following day, with some venues being changed to fit more people. Dates for other continents have been posted on her website.

On February 11th, Billie posted a tweet announcing that she would also be touring in select cities in Europe and Russia. Those tickets were made available on February 13th.

As of May 31st, the setlist typically consists of the following songs:[1]

Other songs performed less frequently include the following:[2] 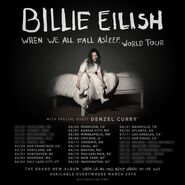 Add a photo to this gallery

Retrieved from "https://billieeilish.fandom.com/wiki/When_We_All_Fall_Asleep,_World_Tour?oldid=13650"
Community content is available under CC-BY-SA unless otherwise noted.