WHEN WE ALL FALL ASLEEP, WHERE DO WE GO? Chronology

"Xanny" (stylized as "xanny") is the third track by Billie Eilish featured on her debut album, WHEN WE ALL FALL ASLEEP, WHERE DO WE GO?.

In the "A Snippet into Billie's Mind" video for xanny, Billie states that the song was written the day after a party where her friends "were Juuling, throwing up, drinking. Kept throwing up, kept drinking more". According to Billie, nobody was fazed by the situation at all and she was watching her friends "become completely not who they were". At this party, a girl was smoking two cigarettes and blew the smoke into Billie's face, which inspired the sound of the chorus, as Billie stated it was meant to "sound like what it feels to be in secondhand smoke".

The production of the song began one night when Billie came into a room in which her brother and his girlfriend were sleeping and began playing the piano, coming up with the song's chord progression and one of its lyrics.

The song discusses the glorification of drug use, drinking, and smoking. It speaks on how more teenagers and young adults are getting into drugs and alcohol over time and how it is becoming normalized in society. Billie stated that the song is not necessarily telling people not to do drugs, but rather to be safe when doing so.

[Verse 1]
What is it about them?
I must be missing something
They just keep doing nothing
Too intoxicated to be scared
Better off without them
They're nothing but unstable
Bring ashtrays to the table
And that's about the only thing they share

[Interlude]
Did you check your Uber rating?
Wait, like, when? Oh my god

[Verse 2]
Waking up at sun down (ooh)
They're late to every party (ooh)
Nobody's ever sorry (ooh)
Too inebriated now to dance
Morning as they come down (come down)
Their pretty heads are hurting (hurting)
They're awfully bad at learning (learning)
Make the same mistakes, blame circumstance

[Outro]
What is it about them?
I must be missing something
They just keep doing nothing
Too intoxicated to be scared
Hmm, hmm
Hmm, mmm, mmm, mmm, mmm
Come down
Hurting
Learning 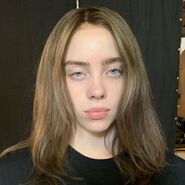 Retrieved from "https://billieeilish.fandom.com/wiki/Xanny?oldid=13529"
Community content is available under CC-BY-SA unless otherwise noted.